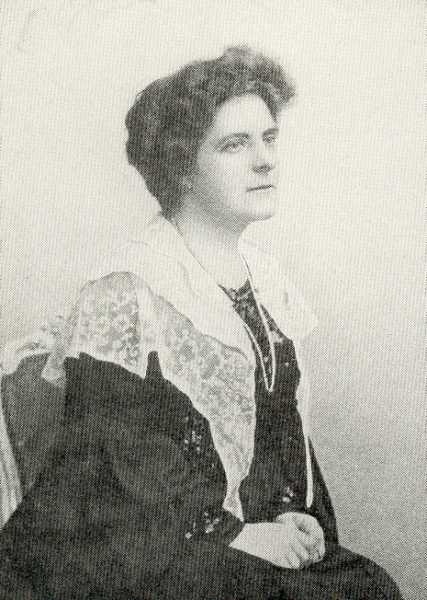 Her keen musical instincts were developed in early years at Birmingham under Charles but in 1882 she entered the Leipzig Conservatorium and studied for a year under Reinecke, Oscar Paul and Jadassohn. In 1883 she removed to the Frankfort Conservatorium, and her study there for two years with Mme. Schumann shaped the course of her career. She had arrived at a favourable time to profit by the tradition and ideals which Mme. Schumann represented, and returned to her own country to perpetuate and extend both. She made her first appearance in England on Oct. 17, 1885, playing at the Crystal Palace Beethoven’s concerto in G, a work which always remained one of her finest interpretations. On Nov. 16 following she played for the first time at the Monday Popular Concerts (St. James’s Hall) choosing as her solo Bach’s Chromatic Fantasia and Fugue, and taking part in Schumann’s quartet for piano and strings. In this season (1885-86) she appeared with Joachim and Piatti in six ‘Popular’ concerts, and henceforward was particularly associated with chamber music of the highest kind. She introduced Brahms’s opp. 116 and 117, took part with Mühlfeld in the first performances in England of the clarinet sonatas and trio, and with Joachim in the first performance of the D minor sonata. She made an appearance at the Philharmonic Society on Apr. 15, 1886, when Sterndale Bennett’s concerto in C minor was chosen for her. She played in Berlin (Nov. 15, 1887) with Joachim, and after giving a recital in Leipzig at the old Gewandhaus, she made her first appearance at one of the regular Gewandhaus concerts (Jan. 5, 1888), playing the Beethoven concerto in G in the same programme as that in which Tchaikovsky conducted his fourth symphony.

In subsequent years she played much on the Continent: at Rome (1890), at the Beethoven House Festival at Bonn (1893), when she contributed the sonata op. 110. She took part in the clarinet trio (B flat) with Mühlfeld, at Vienna (1894-95), where her understanding of Brahms’s music was deepened by personal friendship with the composer, and at Bergamo (1897), she participated in the Donizetti Centenary Festival. She made an extensive tour in Germany with the singer Gervase Elwes (1907). From 1920 onwards she played much with the Bohemian String Quartet both in Prague and England. She collaborated with Casals in chamber concerts (1911-14) and with his orchestra at Barcelona (1923), when she played Beethoven’s concerto in G and that of Brahms in B flat. It is also worth noting that Miss Davies constantly included music of the old English composers in many of her recital programmes, and especially the Virginal Music of William Byrd many years before the modern revival of that music had taken root. She has also sought out and introduced many works by modern composers, especially English, Czech and Spanish. She was the first to give a piano recital in Westminster Abbey (July 1921), and this she was able to follow by other piano recitals in English cathedrals, notably Winchester and York. In short, she was distinguished as an artist who sought the best in music wherever it might be found, and who both in her own playing and her teaching put the ideal of serving the art before all personal considerations. (H.C.Colles)