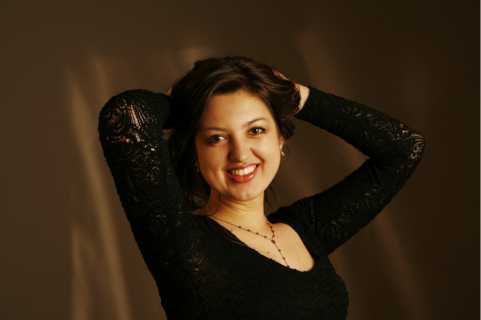 From the Royal Albert Hall in London to Carnegie Hall in New York, the young Romanian pianist Alexandra Dariescu, recently named as “one of 30 pianists under 30 destined for a spectacular career” in the International Piano Magazine, has dazzled audiences worldwide with her effortless musicality and captivating stage presence. Alexandra has recently been awarded the Custodian of the Romanian Crown Medal, the youngest musician to receive a distinction from the Royal Family of Romania.

Alexandra began her piano studies with Mihaela Constantin and Cornelia Apostol at the Special Music School in Romania and moved to the UK at the age of 17 to study at Pocklington School with Faye Mercer, at the Royal Northern College of Music with Nelson Goerner, Alexander Melnikov, Dma Parakhina and Mark Ray, at the Guildhall School of Music and Drama with Ronan O’Hora and she was part of Andras Schiff’s class at the Gstaad Festival in Switzerland.

In 2013 she gave her debut at the Royal Albert Hall with the Royal Philharmonic Orchestra and became the first ever Romanian female pianist to perform in this prestigious hall. Alexandra won UK’S Women of the Future Award in the Arts and Culture category in 2013, Romania’s Woman of the Year in 2014 and she has released two CDs on Champs Hill Records to critical acclaim. Alexandra was named “Special Ambassador of Romania” and was granted a diplomatic passport in 2015.

This season, Alexandra releases her first concerto recording, Tchaikovsky 1 with the Royal Philharmonic Orchestra and Darrell Ang on Signum Records coupled with the Nutcracker Suite arranged by M. Pletnev. She also releases her second volume of complete preludes by Shostakovich and Szymanowski on Champs Hill Records and Mesmerism for piano and orchestra by Emily Howard with the Royal Liverpool Philharmonic Orchestra and Andrew Gourlay on NMC Records.

Over the last season, Alexandra made her debut at the Concertgebouw in Amsterdam as part of a two week recital tour of the Netherlands, at the Piano District Series in Switzerland, with Anhaltische Philharmonie Dessau and Antony Hermus in Germany, Szczecin Philharmonic Orchestra and Ewa Strusiñska in Poland, the Youth Orchestra and flberiu Soare in Romania and Rokiskis in Lithuania. In the UK, Alexandra returned to the Royal Albert Hall with the Royal Philharmonic Orchestra and Grzegorz Nowak, Sage Gateshead in Beethoven Triple Concerto with the Royal Northern Sinfonia and Alexandre Bloch, Alexandra Soumm and Jakob Koranyi, live on BBC Radio 3, Bournemouth Symphony Orchestra and Anthony Inglis and toured the country in various festivals. Alexandra is a Board Member of the Adept Foundation and helped organise the first “Transylvania Festival” in London in the presence of HRH Prince of Wales.

Committed to education, Dariescu continues her collaboration with Rhapsody in School in Germany, leads masterclasses with scholars from the Princess Margareta Foundation in Bucharest and Durban Music School in South Africa and collaborates with Princess Margareta Foundation Youth Orchestra in Romania and the National Youth Orchestra for All in the UK. Alexandra will be the Guest Speaker at Speeches Day at Pocklington School, which will precede a masterclass with piano students.